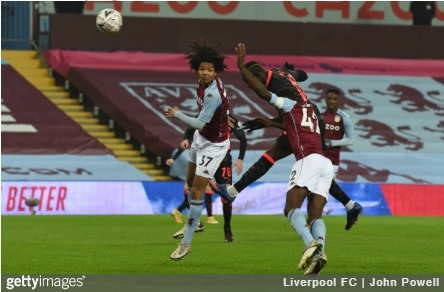 What should have been a very interesting match, given what happened when Aston Villa hosted Liverpool in the Premier League in October, thoroughly lost its competitive edge when the West-Midlands club revealed that a large number of their players and staff had tested positive to Coronavirus around 24h before kick-off. Discussions were held, but in the end it was decided that the third-round FA Cup clash should go ahead as planned, with Villa having no choice but to field their team entirely made of youth players.

Interestingly enough, a very similar thing happened when these sides met in the Carabao Cup last season, only then it was Liverpool who had to field a mixture of their U-23 and U-18 teams as the first team went to win the FIFA Club World Cup in Qatar at the same time. Villa won 5-0 on that day, with manager Dean Smith and assistant John Terry full of praise for the way the Liverpool youngsters played the game.

Having taken his first football steps at Hungarian club Gyor, Akos Onodi joined Villa’s Under-18 side in 2018 and was only promoted to the U-23s last summer. He could hardly have hoped, along with the rest of those who represented Villa on Friday night, to appear in a competitive first-team match against the reigning Premier League champions so soon, but he certainly ‘took the bull by the horns’.

8 – Aston Villa’s 19-year-old goalkeeper Akos Onodi made eight saves tonight, the most by a goalkeeper for a Premier League team in an FA Cup match since March 2018 (Kristoffer Nordfeldt, Swansea vs Spurs, 8). Stoic. pic.twitter.com/R5fCAazEad

Practically every club across Europe’s top five leagues will likely be keeping a close eye on the 19-year-old Hungarian from now on. Onodi showed great reflexes and always positioned himself smartly to produce those saves, but he also showed extreme maturity by knowing exactly when to come for crosses and when to stay on his line. Fully aware that would’ve been likely to get outsmarted by the experienced Liverpool players in a crowd, he refused to be hasty.

The joy of scoring

Onodi wasn’t the only one wearing Villa’s crest who will remember the night fondly. Striker Louie Barry had the biggest smile on his face after the game, despite his team going out of the competition. He looked in awe of the players he had faced then, but he certainly left an impression on them as well.

In the 40th minute, with the score being 0-1 for Liverpool, he latched onto a great pass from Callum Rowe, outpaced Rhys Williams and showed complete control of his emotions as he slotted the ball past Caoimhin Kelleher into the Liverpool net. His expression said it all as he ran on to celebrate – he couldn’t believe what he had done.

It’s probably fair to say that a game like this was probably the last thing the champions needed at this point. They haven’t been on very good form recently, and they were obviously looking for a proper challenge to try and get back on track before they face Manchester United next week in what will be a clash not only between the two most successful clubs in English history, but a clash between the two teams sitting at the top of the Premier League table at the moment.

Instead, it was turned to no more than a glorified training session, and even with that in mind they seemed to have no motivation or desire. The only thing that drove them on was the obvious wish to avoid the embarrassment of going out of the cup at the hands of a youth team, and they played about as much they needed to get through.

Still, an eye that wanted to examine their performance could have found a few things to see.

Liverpool’s biggest problem in recent games was scoring goals, and even though they still spend a lot of time in opposition boxes these days, they simply don’t create clear-cut chances as much as they used to. This is where the likes of Thiago Alcantara and Xherdan Shaqiri come in.

At halftime, Klopp withdrew Jordan Henderson and sent on Thiago. For all the quality the Liverpool captain obviously possesses, the former Bayern Munich man offers something different, most notably some proper old-fashion creativity. His ability to hold the ball under pressure and pick a pass is fantastic, and it helped the visitors a lot in terms of staying on course and speeding the game up in the second half.

Shaqiri entered the fray in the place of Takumi Minamino with just over an hour gone, and showed a high degree of creativity of his own, nabbing two assists to his name.

Thiago and Shaqiri combined particularly well in the 65th minute when Mohamed Salah scored the final goal of the game. Thiago had the ball in the middle of the park and turned his head to the right flank where Neco Williams was about to make his run, thus beautifully disguising the pass which went straight forward into the feet of Shaqiri instead. The Swiss winger then extended it directly into the box where it was welcomed and slammed home by Salah. It was a move which any defence, let alone one as inexperienced as Villa’s in this game , would have struggled to thwart. It was a great example of what Liverpool need to be doing far more often.

Jurgen Klopp will probably have said that to his players after the game, and they’ll likely be spending a lot of time practicing such moves in training sessions between now and next Sunday.