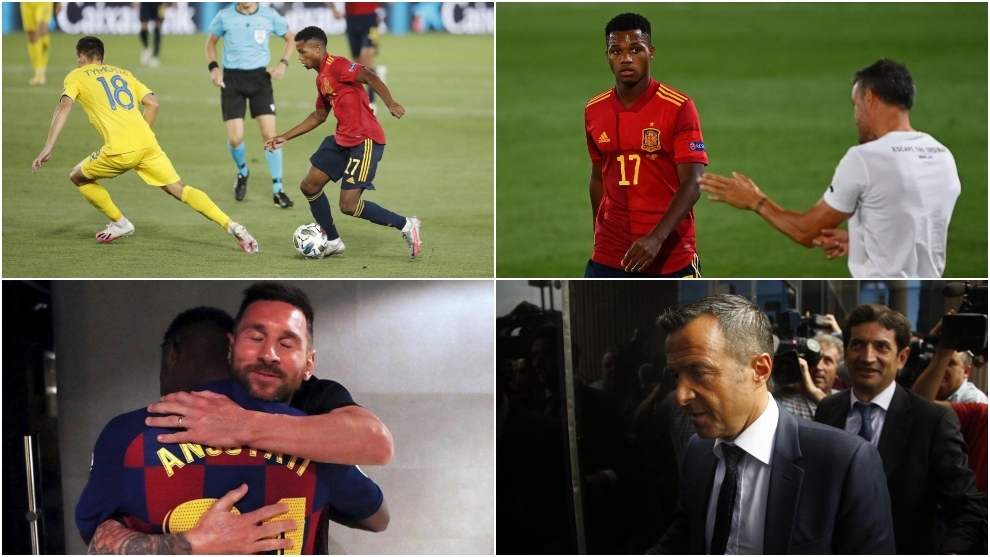 It has been 12 months since Ansu Fati first broke on to the scene in the Barcelona first team.

Ernesto Valverde wasn’t afraid to throw the then-16-year-old in to the fold at the Camp Nou, but called for calm amidst the speculation of superstardom.

Now, a year on, the teenage forward is even shining at international level, becoming Spain’s youngest ever scorer.

Luis Enrique called the 17-year-old up for September’s Nations League games, where he made his senior debut against Germany and scored his first Spain goal against Ukraine.

On Monday, Ansu Fati is expected to re-join the Barcelona squad as he looks to impress new boss Ronald Koeman.

The teenager is due to be one of the Dutchman’s key men this season, but there is still some uncertainty over his long-term future.

Ansu Fati’s last contract renewal came in December 2019, when he extended his deal until 2022.

That contract is still not a professional one and has a release clause of just 170 million euros.

However, his contract will be automatically renewed when he officially becomes a first-team player, which should happen when he learns his first-team squad number.

Then, his release clause will rise to 400m euros.

Barcelona, though, are now dealing with a different agent to when that last contract was signed as the player has recently hired Jorge Mendes.

Although Mendes’ relationship with Josep Maria Bartomeu and his board is very good, the Portuguese agent is always a tough negotiator.

Ansu Fati still plans to stay at Barcelona, though.

However, there is considerable interest growing from across Europe, with other clubs well aware of the player’s contract situation at the Camp Nou.

“Everyone is asking about him,” says a member of the teenager’s entourage.