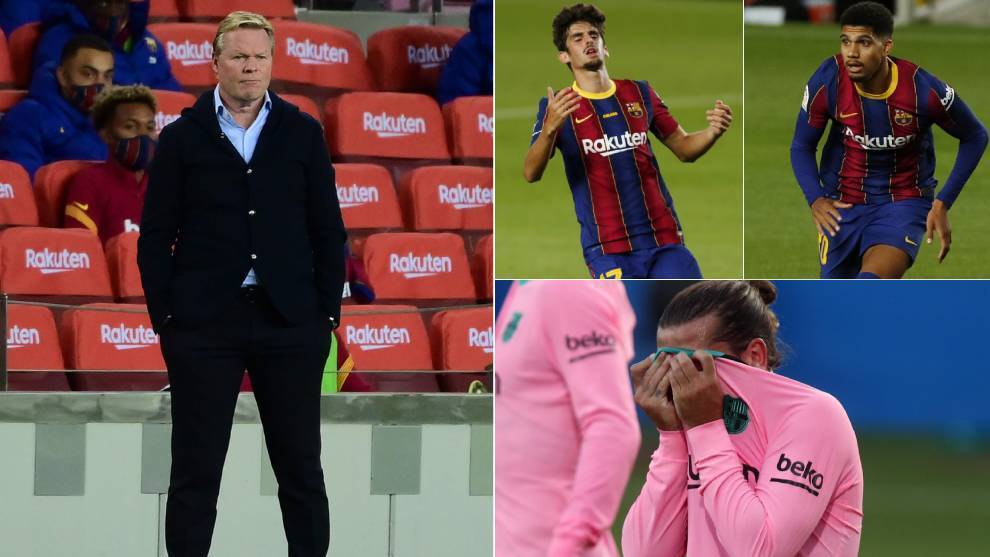 Barcelona’s problems could never be solved overnight, even if the positive results against both Villarreal and Celta Vigo gave fans some short-term relief, yet it was the disappointing draw to Sevilla which has made clear to Ronald Koeman that there is still work to be done.

Sevilla have done incredibly well since Monchi’s return to restructure the team in a way that they once again become incredibly competitive in Europe and at a domestic level.

With Champions League qualification and Europa League success achieved in 2019/20, it was clear that the Andalusian club were going to be the first top team that Barcelona faced this term.

Koeman hasn’t long been in the job and has seen his squad slashed in terms of quality and quantity from the 2019/20 campaign, with Sergino Dest standing as his only signing.

Despite this, the aims at Barcelona haven’t diminished and there is an expectation on the team to win the LaLiga Santander title and challenge for the Champions League, yet there are several areas where the Dutch coach needs to improve his team if those goals are to be considered realistic.

One of the notable improvements shown by the team was the defensive intensity which simply disappeared last season.

However, the physical toll that has taken on the players was evident in the second half against Sevilla, and it showed there was still a way for Barcelona to go before they are fit enough.

It’s striking that Koeman has played with the exact same starting XI, aside from the forced change of Araujo for Lenglet, in a week where his team played three matches.

Both Pedri and Francisco Trincao have been used as subs in these matches, and they are undoubtedly two blue-chip prospects, but they need a much calmer adaptation period than being required to contribute right away.

The disastrous management of transfers in recent years, as well as in the final hours of the summer window just closed, left the squad short.

Rafinha left for Paris Saint-Germain, whilst Jean-Clair Todibo was also allowed to leave on loan, this also left Koeman with Riqui Puig and Matheus, both of whom he doesn’t consider options within his squad.

The biggest headache for the club in the summer, once the Messi fiasco was sorted, was fixing the defence.

Koeman had concerns over the position upon taking the job and attempts to sign Eric Garcia ultimately were unsuccessful.

Araujo’s work in training has impressed the former Feyenoord coach, but he now has to finally make a decision on the right-back issue. Will Dest finally be the one to put to bed the notion that Sergi Roberto is a right-back?

At centre-half, there simply aren’t a lot of options, let alone ones that Koeman trusts, and any injuries in that area could cause a crisis.

Signing Antoine Griezmann is looking more and more of a mistake with each passing day, and the Dutch coach needs to figure out how to use the former Atletico Madrid talisman.

Lionel Messi and Coutinho have occupied central positions this term whilst Griezmann has been forced onto his unfavoured right side. With Ansu Fati now considered a fundamental player on the left, it’s difficult to see Griezmann being afforded a role where he is 100 percent comfortable.

Everything indicates that the 4-2-3-1 formation will stay in place at Barcelona for the time being, and this leaves Frenkie De Jong and Sergio Busquets to hold the double pivot.

This is a very specific role which requires expertise, however there is also the presence of summer signing, Miralem Pjanic.

Koeman has three players and only two positions, which means there isn’t a lot of scope for rotation, especially as the season progresses.

In short, this is an unbalanced squad which isn’t blessed with decks of talent, and in a season of rebuilding the foundations laid by Koeman have been impressive, but there is an awful lot of work to be done before he can be comfortable.