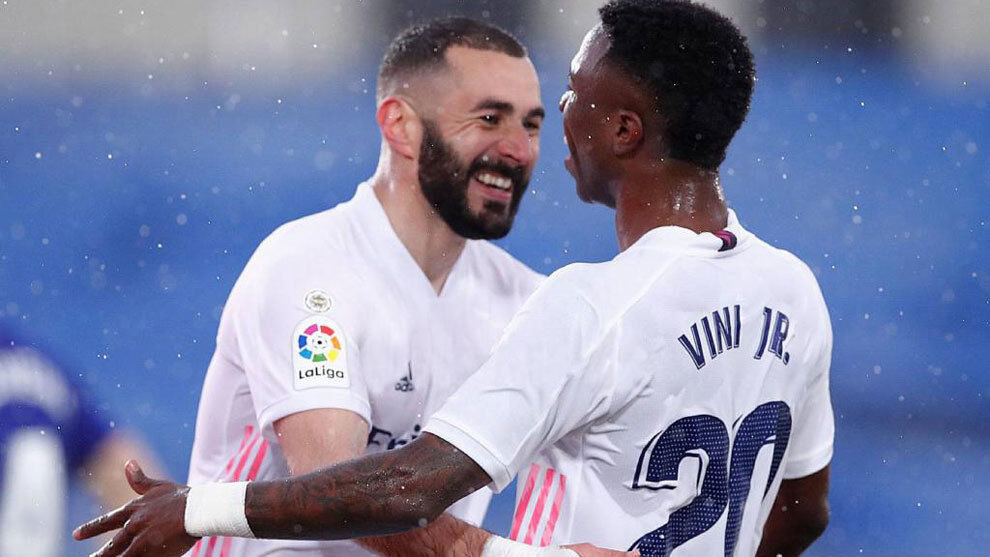 Karim Benzema has been waiting for somebody to talk all the goalscoring burden off his shoulders in Madrid, and Vinicius Jr’s brace against Liverpool may have been the start of his transition into that role, and the French forward has praised the Brazilian, stating that even though he sometimes shouts at him, it’s because he believes in his talent.

Florentino Perez opted to sign Vinicius Jr as an unheralded teenager to avoid his price skyrocketing as happened with Neymar, yet the former Flamengo prodigy has been painfully inconsistent throughout his time in Spain.

“Vini is a very young player, but I believe in him because he has everything to succeed here,” Benzema explained in an interview with LaLiga.

“This is why I talk a lot with him on the pitch, sometimes it’s a little loud, but that is because of him. He can give more, because when he wants to be, he is a phenomenon.”

A Clasico victory will put Real Madrid right back into the title picture in Spain, and Benzema believes the match represents the ultimate test.

“The Clasico for me is the best game in the world,” Benzema added.

“Not only for me, but for everyone, because there are two teams that have a lot of history. It’s always a very important match.”

Given his own form has been so impressive over the past two seasons, Benzema would be forgiven for displaying a kind of over-confidence, yet the Frenchman refused to fall into the trap of self-praise in the build-up to such an important fixture.

“I don’t know if this has been my best season,” Benzema confirmed.

“Every year I start from scratch and I want to improve on the previous one.

“Now I’m on a scoring streak and if I can continue, with work to help my team win points and games, I’m going to do it. The important thing is to win.”

0 24
Aguero’s condition to negotiate with Barcelona