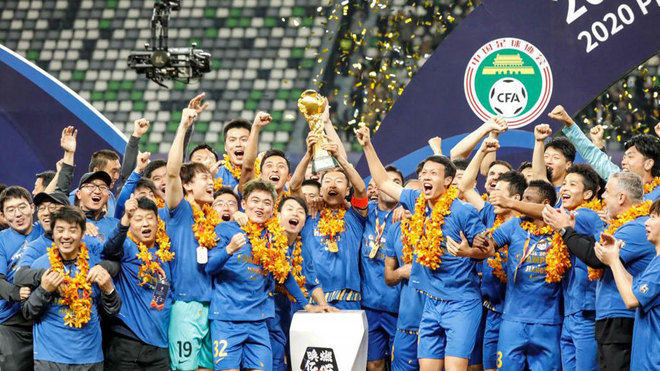 Jiangsu Suning will be at Club World Cup.
AFP

Jiangsu Suning claimed the Chinese Super League title this week by beating Guangzhou Evergrande in the second leg of their final.

The win presents them with a double prize; not only the trophy but also a place in the new-look FIFA Club World Cup, presenting them with the chance to compete against the likes of Real Madrid, Sevilla and Atletico Madrid, who have already booked their places among the 24 teams who are set to compete in 2021.

Guangzhou Evergrande were the early favourites to take the title, but Jiangsu Suning turned things around with a 2-1 win in the second leg, after the first game had ended scoreless.

Now they’ll have the opportunity to test themselves against Europe’s best. The aforementioned LaLiga Santander sides will be joined by other recent European champions like Liverpool and Chelsea from the Premier League, as well as Bayern Munich.

Jiangsu Suning will relish the opportunity to take on Europe’s elite, and Guangzhou Evergrande will be disappointed to have missed out, though they’ll have the chance to qualify via the AFC Champions League.

The semi-final match between Barcelona and Guangzhou Evergrande in 2015’s Club World Cup was a big moment for Chinese football, although it wasn’t their first participation, having taken on Bayern in 2013.

Jiangsu Suning already know, though, that they won’t have the luxury of hosting any European force at home, with their stadium not chosen as a venue for the competition, something that Guangzhou Evergrande would be able to enjoy should they qualify.