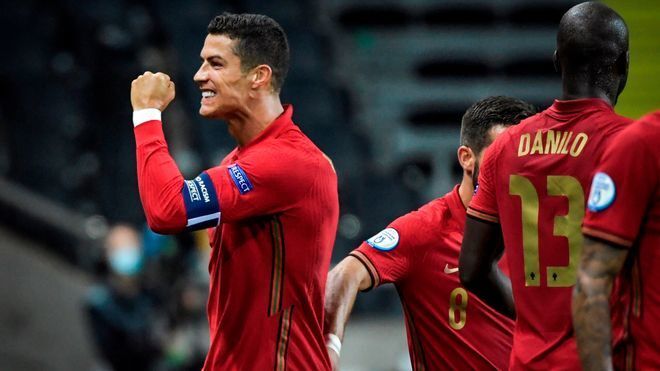 Cristiano Ronaldo is no stranger to breaking a record and at Euro 2020 he’ll be gunning for another. If he scores six goals at the tournament, he’ll become the top international goalscorer of all time.

The record for international goals is currently held by Iran legend Ali Daei, who scored an incredible 109 goals in 149 games for his country. Ronaldo, meanwhile, has 104 in 174.

Five goals would tie it, while six would give him the record outright. Neither is an impossible feat, but either would be highly impressive and require him to have his best ever tournament.

In fact, if we count the Confederations Cup and UEFA Nations League finals, the Portuguese star has now scored in 10 consecutive international tournaments. That’s another world record.

If we take the World Cup and the Euros as the true major tournaments, Ronaldo‘s record is 16 goals in 38 games. Not bad at all.

However, despite all that, the 36-year-old has never had a single truly standout tournament in terms of his own individual goal tally. Of course, it’s the team that matters and winning Euro 2016 with his country will mean more to Ronaldo than any individual record.

What it does mean, though, is that if Ronaldo is to overtake Ali Daei in the coming weeks, he’ll need to produce something special and surpass himself once again. With Ronaldo, you can never bet against that.

His highest tally at a tournament is currently his four-goal haul at the World Cup 2018, while he has twice scored three goals at the Euros (2012 and 2016), again something no other player has done.

The Juventus forward would, therefore, have to double his previous best Euros total to be crowned the top male international goalscorer of all time this summer.

The good news for him is that this year’s expanded tournament format could play in his favour in this regard. The bad news is that Portugal have been landed in the group of death, along with France, Germany and Hungary.

The man from Madeira is known to be hugely patriotic and takes a special pride in pulling on a Portugal jersey. He would insist that the team and the nation come first. But, surely, at the back of his mind, he knows that he might just be able to break the record at Euro 2020.

Given the incredible condition he remains in, belying his 36 years, it is surely a matter of when and not if the record does get broken, but it would be a bit more special to do it on the big stage and Ronaldo is no doubt aware of that.

0 48
Odegaard left out in the cold: Why has Zidane forgotten about him?

0 27
Introducing Nagelsmann: The most expensive coach in football history

0 40
Xavi named January coach of the month in Qatar