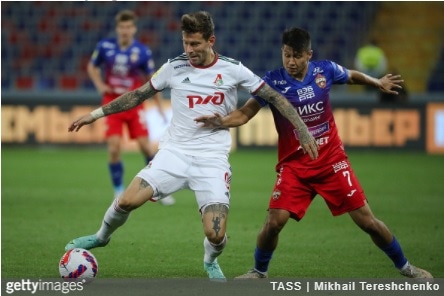 The contest was mostly dominated by the visiting side, who had its flow mostly under their control for more than three quarters of the time. The stats clearly back that up, with Lokomotiv having 58% of possession and making 526 passes with a completion rate of 82%, compared to CSKA’s 382 at 75%, even though the home team took 16 shots in total, one more than the visitors.

Arranged in a 4-4-2 formation, Marko Nikolic’s team mostly held the ball in the opposition half, successfully preventing CSKA from taking it forward and attacking in numbers. CSKA started in what was supposed to be 4-1-4-1, but it was mostly 4-5-1 with even striker Anton Zabolotny forced to do a lot of defensive work in his own half.

The goal scored by Bistrovic was a set-piece; a beautifully taken free-kick that hit the top corner from close to 30 yards out. Lokomotiv equalized also from a dead-ball situation four minutes later, with defender Murilo Cerqueira winning a header from a corner and Smolov finding himself at exactly the right spot to turn it in from close range. Zhemaletdinov’s winner came, however, from a nicely executed attacking move which eventually resulted in midfielder Daniil Kulikov threading a lovely pass which Zhemaletdinov took and fired past Igor Akinfeev. The veteran CSKA goalkeeper was unable to keep it out, even though he did get a hand on it.

Things changed after CSKA boss Aleksey Berezutskiy performed a triple change in the 68th minute and the home team pushed for an equalizer really hard, but it wasn’t to be.

Referee Alexey Valerievich Matyunin didn’t look properly up to the challenge of officiating such an important match, the derby of the round, as it were. A lot of his calls can only be described as strange, and even those in charge of VAR didn’t exactly cover themselves in glory either.

There was one particular moment when CSKA could have (and probably should have) been given a penalty. Minute  was passing when a long ball into the Lokomotiv box, aimed at Zabolotny, struck the arm of defender Stanislav Magkeev. At first glance, it seemed the contact between the ball and the arm was accidental, but on a second viewing, it was quite obvious that Magkeev had watched the ball’s flight closely and made what could only have been a voluntary movement with his arm to block its path to the CSKA striker. Zabolotny naturally protested and he wasn’t the only one, but the referee waved the protests away and the VAR remained silent.

That aside, there were many other dubious calls elsewhere on the pitch, which, it could be argued, didn’t have such a strong effect on the result. However, one of those moments was the free-kick given to CSKA which Bistrovic turned into a lead for his team, and which was arguably supposed to go the other way.

One thing that can be said in the referee’s defence is that he certainly wasn’t showing any favoritism towards one team or the other; both teams had plenty of reasons to complain.

There are plenty of things going on at Lokomotiv at the moment. The club, mostly under the close control of Head of Sports and Development Ralf Rangnick, are changing the approach to managing the team and the finances, a move not too appreciated by a large section of their supporters. It makes Nikolic’s job much harder than it would have been otherwise, but the Serbian coach is not complaining, and neither are the club about the way he does it.

At the moment, there’s certainly nothing for them to complain about. Lokomotiv have won both their league matches so far, looking very decent as a collective as well as boasting a few individuals who seem quite capable of taking charge and changing a game. Zhemaletdinov is one of those; the attacking midfielder now has three goals in two matches. Dmitry Rybchinsky is another.

At the moment, it’s anyone’s guess what happens for the rest of the season, but Rangnick’s reputation as the man to stabilize a club in problems is no accident, and Lokomotiv can only benefit from his initiative.

0 8
´It was hard for me to find a photo of when we played!´ – Isco makes light of Madrid omission in Mar