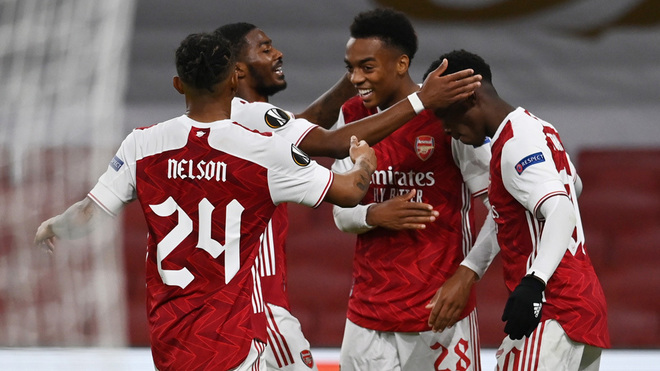 Arsenal’s Thursday night Europa League clash with Dundalk was the English club’s first ever competitive meeting with a side from the Republic of Ireland and it was a comfortable 3-0 victory for the Gunners.

Goals from Eddie Nketiah and Joe Willock just before half time were followed by a Nicolas Pepe super strike right at the beginning of the second half. On the scoresheet, the three goals were separated by just four minutes and ended Dundalk’s hopes of a miracle upset.

For most of the first half, the team currently sitting third in the League of Ireland Premier Division were largely comfortable. Arsenal tried to gradually turn things up and Willock and Pepe were both lively, but it took a poor attempt at collecting a corner from visiting goalkeeper Gary Rogers for the deadlock to be broken in the 42nd minute, with Nketiah capitalising.

Nketiah then set up Pepe for an attempt moments later and the Ivory Coast international’s shot ricocheted its way to Willock to make it a 2-0 half time lead, scoring just 125 seconds after the first goal.

After the stop by the dressing room, Pepe made it a three-goal lead as he collected the ball on the edge of the area and managed to jab it powerfully into the goal with almost no swing at all.

Arsenal couldn’t add another, but their three points put them top of Group B with two wins from two. They’re level with their next opponents Molde on six points, but have a better goal difference, while Dundalk and Rapid Wien are both stuck on zero points.