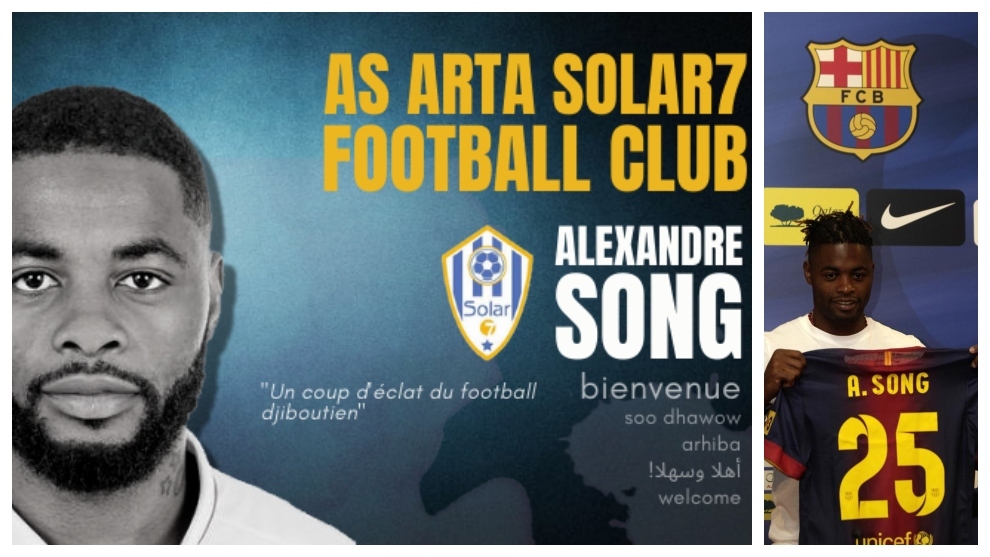 Djibouti isn’t a traditional footballing powerhouse – as a national team they have never played in either the World Cup or the African Nations Cup – yet former Barcelona ‘star’ signing Alex Song has agreed to head to the African country to sign for AS Arta Solar 7.

Having penned a two-year contract after his time with Sion came to an end, the former Arsenal midfielder is arriving as perhaps the most decorated footballer to ever play in Djibouti’s domestic system, which says an awful lot.

“It’s a coup for Djiboutian football,” a statement from AS Arta Solar 7 read.

Song, having played with Lionel Messi at Barcelona, also suggested that this move was motivated by a desire to give something back to the sport.

“It’s an opportunity for me to promote local football here,” Song explained.

In a report published by the BBC, Song will also combine his playing role with a staff position, in which he will be given control of the development of AS Arta Solar 7’s youth system.

At 33 years old, it could be argued that Song should still be playing in one of Europe’s major leagues, even if some argue that he was overreaching his own potential by getting to play for both Arsenal and Barcelona.

The rapid decline of Song’s career has been staggering, especially when you look back on just how Barcelona’s sporting director at the time, Andoni Zubizarreta, spoke of the midfielder at the time of his arrival.

“We decided on a midfield signing due to the departure of [Seydou] Keita, and Song was at the top of our list,” Zubizarreta declared.

“He had technical ability, great ball control and tactical knowledge.

“His physical attributes were good, although we didn’t sign players based on height, but we looked at players who could complete our squad.”

Needless to say, Song and Barcelona were never a match made in heaven, as many Arsenal fans predicted with the Cameroon international having only had one outstanding season with the Gunners, aided significantly by the form of Robin van Persie.

Song would play 65 matches in total for Barcelona, scoring one goal and providing two assists, before leaving for West Ham United on loan.

“Zubizarreta told me that I wasn’t going to play much,” Song explained.

“I told him that I didn’t care, I knew that now I was going to truly be a millionaire.

“I thought of my wife, my children and that it was necessary that we all have a comfortable life after my footballing career ended.”

The decline from that spell in east London was palpable, as his contract with Barcelona was terminated in 2016, leading him to the Russian Premier League, where he would sign with Rubin Kazan.

Often seen as one of the great surprise stories of Russian football in the 2000s, the Kazan club never saw the best of Song either, and he played 23 matches for them scoring one goal and added one assist over the period of two domestic seasons.

Yet again it was a disappointing return from a player whose reputation was dropping dramatically, however Song would then seek to reinvigorate his career in Switzerland.

Sion provided such an opportunity, although after initial positive signs things quickly began to unravel there too.

It was a spell marked by off the pitch problems, and the Swiss club would eventually fire Song after 22 matches with the senior team in March of 2020 after he refused a pay cut at the beginning of the COVID-19 crisis.

Having been a free agent since that moment, Song has taken a move that perhaps may give him peace of mind and a chance to make a difference to football in Djibouti, although for the rest of us it leaves us with a question: how did this happen to a Barcelona player?