In the 80th minute of this afternoon’s tie between Chelsea and Crystal Palace, the Blues were awarded another penalty after a clever bit of play from big-money signing Kai Havertz.

Havertz picked up the ball after a lax clearance from Mamadou Sakho, the attacking midfielder then capitalised on the defender’s reckless attempt to win the ball by flicking the ball over his leg.

The referee had no choice but to point to the spot, specialist Jorginho stepped up once more and used his usual hop-skip technique to fire the ball into the same corner as he did minutes earlier.

There was a slight disagreement before the penalty was actually taken, club captain Cesar Azpilicueta sent away Tammy Abraham after the ace attempted to take the spot-kick ahead of Jorginho.

Tammy Abraham is not happy about this ? 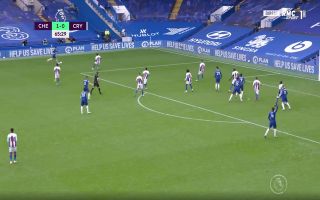 Chelsea have looked like a completely different side in the second-half of the encounter, they’ve made their dominance count by showing cutting edge in the final third.