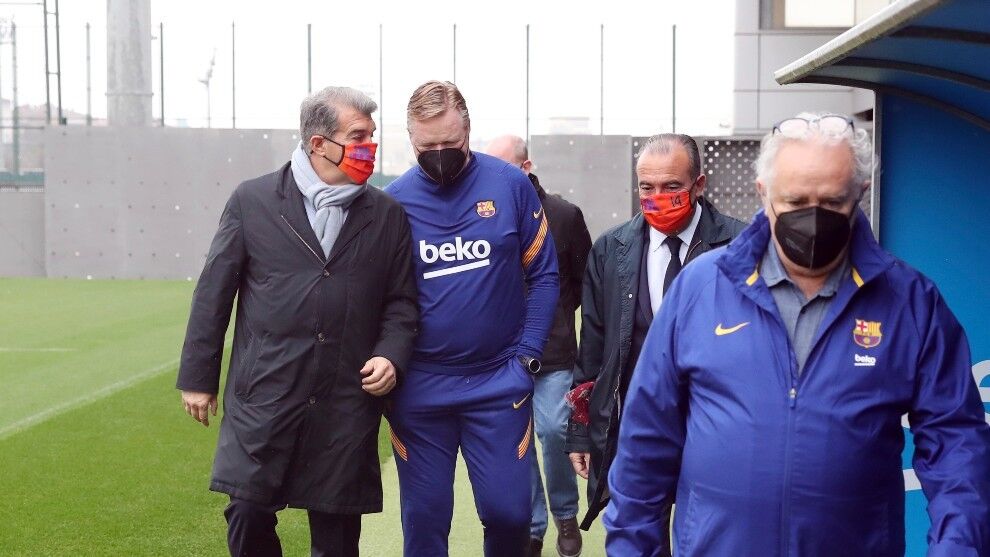 Ronald Koeman‘s Barcelona future is under discussion. This Tuesday afternoon, Joan Laporta is at the Camp Nou offices to reach a decision about whether or not the Dutchman will continue in his job.

Laporta, along with Mateu Alemany and Rafa Yuste, is set to decide on Tuesday. Koeman himself is due to meet with the three and their decision will be communicated to him.

Koeman will find out if he has done enough to convince the new board that he is deserving of another year in the job, but he already knows that his fate has been out of his own hands since the end of the LaLiga Santander season.

By early Tuesday afternoon, nothing was known about Koeman‘s future. Laporta has had a lot of doubts about the coach since his arrival and he, unlike Koeman, believes that the squad at the club is capable of competing to a higher level in LaLiga Santander and in the Champions League as well.

Laporta, though, does have the problem of not seeing an obvious replacement available at the moment.

The president doubts Xavi Hernandez‘s suitability for the role with this current group of players – with the ex-Barcelona midfielder having played with a number of them. As well, Hansi Flick has just been given the Germany job, Jurgen Klopp is under contract at Liverpool and Mikel Arteta is in talks to renew his deal at Arsenal.

After Tuesday’s meeting, Koeman, who won the Copa del Rey, will know if he will still be in the job come the beginning of the 2020/21 season.

Earlier on Tuesday, Jan Kabul, Georginio Wijnaldum‘s representative, was at the club’s offices. The Dutch midfielder’s contract with Liverpool comes to an end on June 30 and he is expected to join Barcelona.

0 52
Zidane: Consequences? What should we do, abandon the season?

0 27
Can new father Jon Rahm break his major drought at the Masters?