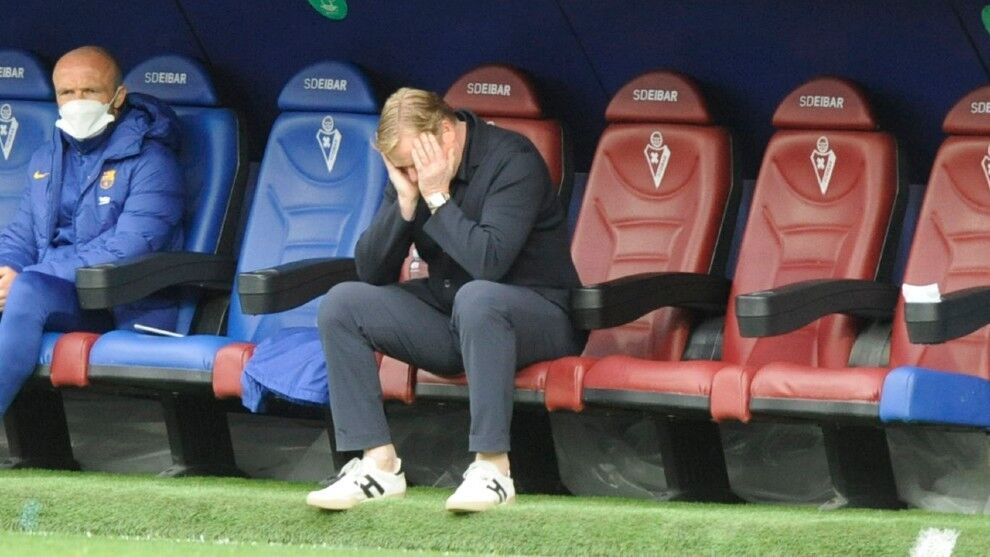 Ronald Koeman ended the 2020/21 season with disappointment, despite Barcelona managing a narrow 1-0 win over Eibar in the final matchday of the campaign.

The Dutchman’s future is still up in the air and he is more likely to find himself out of work this summer than to continue at the club, but he doesn’t think that the current squad at the Camp Nou is up to the level that a club of Barcelona‘s stature need.

“The squad was assembled by the time we arrived,” Koeman said after the Eibar game. “The only signing we made was [Sergino] Dest. The squad isn’t completely at the level we want at Barcelona.

“A lot of people at the club think this way. We want to improve the squad. There are older players who have shown themselves to be of a level to play for the team, and younger players who need experience to be better players.

“To be better, we have to be more effective up top. We scored a lot, but the percentage of chances we take is lower than it should be at Barcelona.”

Due to meet Joan Laporta shortly after the season has wrapped up, Koeman believes that he still has a future at the club.

“I don’t think this is my last game,” Koeman said. “I have a contract.

In all, the Dutchman is pleased by what he has seen from his players over the last year, even if he knows there is still work to be done.

“We have a young team but we have grown. It’s largely positive. We want to win everything, but you can’t always do that.”

Atletico Madrid ended the season as champions, beating Real Valladolid 2-1 on the final day, which Koeman thinks they just about deserved.

“Atletico deserved to win the title,” Koeman said. “They’ve led for a long time and have a very good squad.

“They were a little bit better than Real Madrid and Barcelona. We made changes and it’s just one season, so we need more time.”

0 38
The message is clear at Real Madrid: It’s time for the players to wake up

0 36
Nick Kyrgios knocked out…of relationship by girlfriend: You disgust me

0 27
This Real Madrid side are blameless

0 38
The winners and losers of the NBA trade market