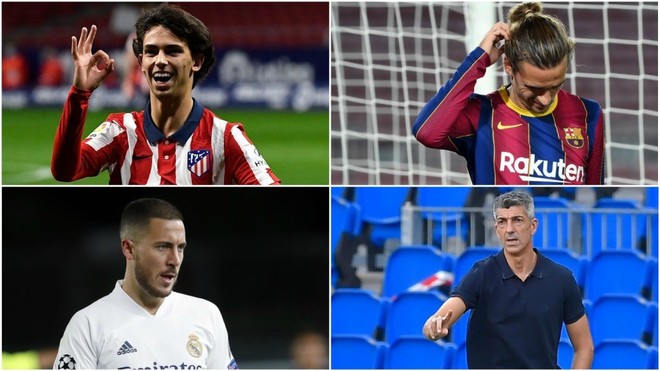 We’re not even a quarter of the way through the LaLiga Santander season, but we can already take some initial thoughts and make informed predictions, and that’s just what fans have done.

In our survey, more than 40 percent of voters chose Atletico Madrid as their title favourites for the LaLiga Santander crown in 2020/21, ahead of Real Madrid in second place and Barcelona in third, with current leaders Real Sociedad recording 13 percent of the vote.

If Atletico are leading, it’s because of the star performances of Joao Felix, who has won the most votes for the most valuable player in the competition.

On the other end of the spectrum are the biggest disappointments, where Antoine Griezmann and Eden Hazard lead the way by some distance with almost two thirds of the vote between them, accounting for 85 percent if you include Isco.

Predictions were also made for relegation, with Huesca, Real Valladolid and Celta Vigo leading the stakes, with Huesca the most voted at 30 percent.

Thanks to the good start from Real Sociedad, with 52 percent of readers saying that they’ll qualify for the Champions League this season, Imanol Alguacil leads the vote for the best coach so far this season.

Arturo Cervera from Cadiz and Granada’s Diego Martinez are also recognised for their bright starts to the campaign.

Finally, the best young player under the age of 23 has been chosen as Barcelona’s new arrival Pedri with a whopping 58 percent of the vote, with Joao Felix and Ansu Fati not included given that they were included in the best player category.

Fans also voted that the absence of fans in the stands if the worst aspect of LaLiga Santander this season, with VAR and an absence of big money signings also being factors.