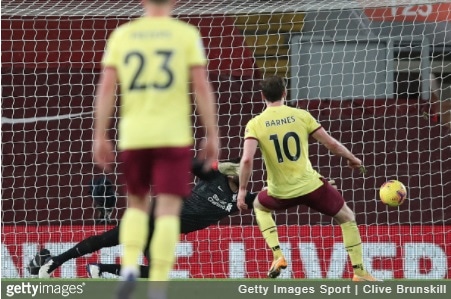 It was always going to be Burnley, wasn’t it? Not Manchester City, not Tottenham Hotspur, Chelsea or Arsenal. Not even arch-rivals Manchester United. It took 68 games over almost four years for Liverpool to suffer a home defeat in the Premier League, and the fact that it was against one of the lower-quality teams – no disrespect meant – is not altogether surprising.

Rarely have Liverpool been efficient against low-blocking opponents since Jurgen Klopp took over; in fact, since that thrilling 2013-14 season when the brilliance of Luis Suarez and his partnership with Daniel Sturridge led the Reds to the brink of winning the title. They’ve always found it easier to defeat teams who come at them, be it Manchester City, Bayern Munich or Barcelona. In a way, Burnley are like a lower-level Atletico Madrid, and we all know how the Reds fared against the Rojiblancos in the Champions League last season.

This is it, this is what Sean Dyche does, not against Liverpool specifically, but generally. Two banks of four, deep in their own half, consisting almost completely of players boasting extreme physicality and using it in numerous ways. But their main task is not to allow the opposition a sight of goal, let alone anything else, and with eight, sometimes nine outfield players inside their own box, they really do do that.

Manchester United managed to fare differently at Turf Moor recently, but only through a deflected shot by Paul Pogba which somehow found its way through and caught the excellent Nick Pope by surprise.

Upfront, the height, strength, experience and wit of Ashley Barnes and Chris Wood, as well as their hold-up skill and ability to feed off each other, are the usual weapons which sometimes do the trick. Only Pep Guardiola’s Manchester City somehow always find it easy to play around them and stuff their net.

They kept their lines looking the same as always in this game, closing down attackers in great numbers, and the few times the Merseysiders broke through, Pope was there as the final, insurmountable hurdle.

The way Burnley played aside now, there is something seriously wrong in Liverpool’s approach lately. Klopp, usually so good at getting the best from his players and then some, simply isn’t getting that at the moment, and it’s been telling for a while now. It seems the players have hit some kind of a barrier, more mental than anything else. It’s affecting their performances – mostly in front of the opposition goal, where 27 (!) shots were not enough to hit the back of Pope’s net. Coupled with just under 72% of possession, it shows that the champions are still capable of dominating games – not only against Burnley – but they now haven’t scored a single goal in their last four matches.

So what’s wrong there?

Liverpool’s season has been severely hampered by the long-term injuries to both members of Klopp’s preferred centre-back partnership, Virgil van Dijk and Joe Gomez. Players who have stepped into the breach – injury-riddled Joel Matip, midfielders Fabinho and Jordan Henderson, youngsters Nathaniel Phillips and Rhys Williams – have all done reasonably well when called upon, particularly Fabinho.

But the Brazilian’s shift from the midfield line back into defence left a void in the middle of the park which affects the team going forward. The most creative player at Klopp’s disposal, Thiago Alcantara, simply cannot make the impact expected due to being tasked with too much work as a defensive midfielder. Further more, he excelled in a midfield two in a 4-2-3-1 shape at Bayern Munich, and the conclusion is there; the brilliant Spaniard needs a proper defensive midfielder by his side to unlock his tremendous quality.

Upfront, things just aren’t happening for Sadio Mane, Roberto Firmino and Mohamed Salah. Xherdan Shaqiri and Divock Origi, who actually started this game to be replaced later by Firmino and Salah, didn’t fare any better against the many layers of the Burnley defence. Though it must be said that the best chance of the game fell for Divock Origi as the Belgian took advantage of the only mistake a Claret made in the match – captain Ben Mee – in the first half and charged towards Pope’s goal, only to see his powerful effort slam against the crossbar; a mark of a striker with a notable lack of self-confidence.

As Klopp himself indicated after the match, it’s his job to work with these players and to find ways for them to improve, both as a team and individually. But if doesn’t get there fast, the chances of retaining the title will soon fade from slim to non-existent.

Much has been said about the faltering standards of refereeing in the Premier League this season, and VAR, instead of stepping in to clarify situations, often only adds to the confusion. Mike Dean, who has sparked controversies before in his 21-year career so far, is only a drop in a sea so murky that transparency becomes a word with no meaning whatsoever.

We’ve had Michael Oliver admit to not sending off Everton goalkeeper Jordan Pickford against Liverpool for his season-ending lunge into Van Dijk being a mistake, by both him and those in the VAR room. We’ve had Paul Tierney heavily criticized for blowing the halftime whistle six seconds early, just when a pass from Shaqiri had released Mane in behind the Manchester United defence. And now Dean.

At the end of the first half, a scuffle broke out between Barnes and Fabinho. Both players entered a duel a bit too fiercely, and Barnes even appeared to have kicked out at Fabinho in the process, Dean blew for halftime, and both sets of players ran to join the heated exchange. Dean stepped in to resolve the matter and booked – Fabinho. Not Barnes. It’s worth bearing in mind that it would have been the second booking for the Burnley striker, whose first booking, only six minutes earlier, bordered on being a red as he recklessly mowed down Thiago. Bur Barnes was let off the hook, and he later went on to win the 83rd-minute penalty and converted it himself, thus settling the game. If Dean was reluctant to avoid sending anyone off at that point, which would be quite understandable, it would seem only fair not to have booked Fabinho either.

And speaking of that penalty, it was a dubious call, to put it mildly. Barnes was once more in a tussle with Fabinho, just outside the box. Fabinho did commit a foul there (still outside the box), using his hands to pull Barnes back, but Barnes rode the challenge, broke free and entered the penalty area. Released by Fabinho, he got to the ball just ahead of Alisson Becker in Liverpool goal and chipped the ball over, and it went out of his control, bouncing harmlessly out for a goal-kick. But Barnes then bent his knees and threw himself on the ground, which resulted in Dean blowing his whistle and pointing to the spot. VAR remained quiet.

That was it. There was still 10 minutes (stoppage time included) to go from that point on, but if Liverpool’s case in terms of scoring was desperate before, it became utterly hopeless afterwards.

On the other hand, Liverpool definitely shouldn’t use this moment as an excuse for the result. Had the scoreline been 3-0 or more in their favour, as it should have been given their domination of the game, Alisson would probably have smiled at Barnes’s dive and the sound of Dean’s whistle, and not protested fiercely as he did.

Be that as it may, Burnley have done more than they had hoped for, and certainly got more than they deserved from this game. They broke Liverpool’s unbeaten home run, and they got a nice, seven-point cushion between them and Fulham in the relegation zone. As for Liverpool, it’s now up them to rise quickly and play on, being in fourth place and six points off the top.

0 33
Mbappe after Barca hat-trick heroics: It would be stupid to decide my PSG future on a single match