A picture of the new Liverpool training ground trophy cabinet has been shared by reddit user u/Sunibinus – and they’ve made a pretty bizarre design decision.

Liverpool are in the process of departing their Melwood training ground to move into their brand spanking new AXA facility. They’ll no doubt be keen to remind the players of their illustrious history on a daily basis, even if much of it is being left behind at their old training ground.

Reddit user u/Sunibinus shared a photo which gave us a little bit of insight into how exactly the Reds are going to do that at the AXA, posting the below photo of a brand new trophy cabinet which is in the process of being erected. 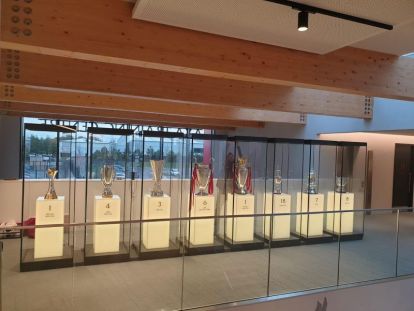 What you will notice, though, is that Liverpool have decided to separate their league titles from their Premier League title, inexplicably. They’ve got for the 18+1 split, rather than just celebrating the fact that they’ve won 19 league titles in their history to date.

Considering the switch to the Premier League was nothing but a rebrand, it seems a little bizarre, doesn’t it?