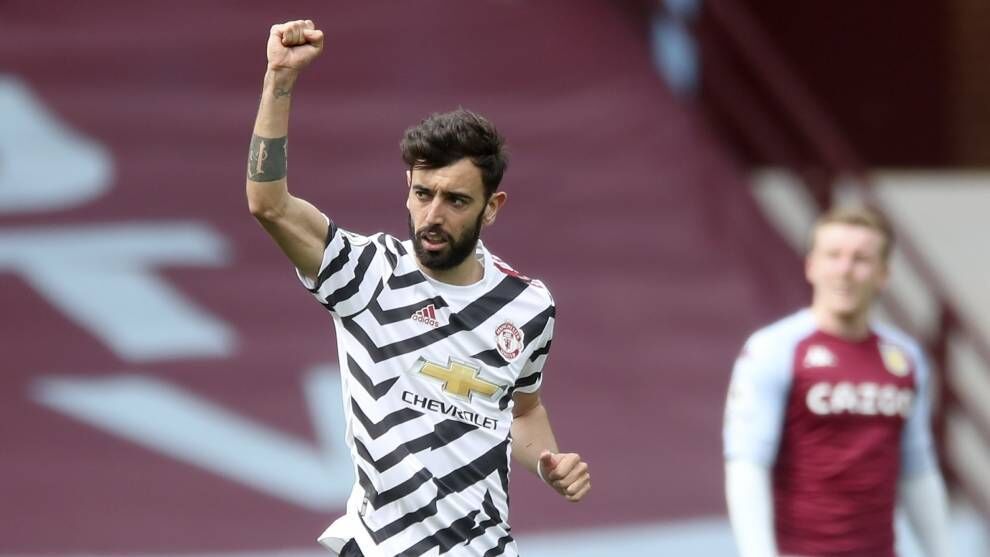 Manchester City’s Premier League title celebrations were put on hold again as Manchester United fought back to win 3-1 at Aston Villa on Sunday.

Pep Guardiola’s side missed a chance to seal the title when they lost 2-1 to Chelsea on Saturday.

City could have started the party if second-placed United lost at Villa Park, but their arch-rivals kept the leaders’ champagne on ice with a second-half escape act.

City, with three matches to play, are now 10 points clear of United, who have four games left.

United host Leicester on Tuesday and Liverpool on Thursday, with a defeat in either of those matches guaranteeing the title for City, who are next in action at Newcastle on Friday.

The Europa League finalists would love to keep City waiting as long as possible as they bid to earn a runners-up finish, which would be their highest end-of-season position since Ole Gunnar Solskjaer took charge in December 2018.

But treble-chasing City’s blistering form has turned the title race into a procession since the new year and it is only a matter of time before their coronation is confirmed.

They will have to wait another 48 hours at least due to the latest display of United’s fortitude.

Villa took the lead in the 24th minute through Traore, who turned sharply in the penalty area and shrugged off Victor Lindelof before smashing a superb strike into the top corner from an acute angle.

But Solskjaer’s team have been experts at second-half comebacks this season and Paul Pogba won a 52nd minute penalty when Douglas Luiz needlessly bundled over the United midfielder.

City’s Sergio Aguero had missed a penalty against Chelsea with a risky ‘Panenka’ chipped effort, but Fernandes was far more clinical as he sent Villa keeper Emiliano Martinez the wrong way from the spot.

Greenwood put United ahead four minutes later as he swivelled past Tyrone Mings on the edge of the area and drove a low finish past Martinez’s weak attempted save.

United suffered a blow when their captain Harry Maguire limped off after colliding with Anwar El Ghazi.

But Cavani wrapped up the points with a glancing header from Marcus Rashford’s cross in the 87th minute.

Villa striker Ollie Watkins was sent off moments later for a second booking after diving in a failed attempt to win a penalty.

0 29
Benzema: I believe in Vinicius Jr, sometimes I speak to him loudly, but it’s because of him