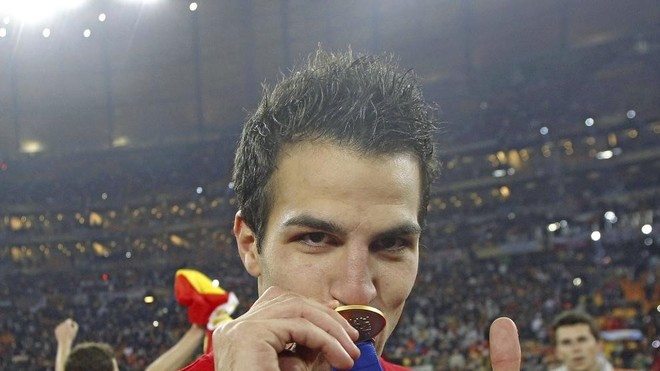 Cesc Fabregas has revealed how Vicente del Bosque’s Spain dealt with the pressure of losing their first game at the 2010 World Cup. La Roja were beaten by Switzerland in their first group match, making the following two fixtures against Chile and Honduras of such high importance.

As part of MARCA Sport Weekend, we spoke to the former Arsenal, Barcelona and Chelsea midfielder about that summer in South Africa, the tension in the Spain camp, the emotion of being a world champion and, of course, that assist for Andres Iniesta.

Yeah. Very difficult. Obviously, the fact that we were such a close group helped. We had a great group of people there. Not only did we get on with the staff, but I think we did with the journalists and fans as well. There was a certain concern, but there was also confidence in the group that we could pick ourselves up. I remember some tough nights and training sessions because, despite the fact that we had the confidence that we could do well and turn the situation around, that game against Switzerland did a lot of damage.

To be honest, we were very used to winning from Euro 2008 onwards. We had two very good years, including World Cup qualification. After the game against Switzerland, we had a few very tense days because we knew the second game was winnable but, at the same time, every game becomes like a final after you lose. I noticed the most tension [before] the game against Chile. I don’t know if it was fear, but there was most tension on the bus on the way to the stadium. You could hear a pin drop. They were quite nervous moments because we knew that one slip-up, as it goes in football, one red card, one own goal… something stupid can send you home. There would’ve been disappointment for the whole country, without doubt.

Without doubt. I think that was the point when our World Cup started, playing like we knew how to. Yes, we did end up winning every game 1-0, but there were moments, at least against Paraguay, when we were quite on top but we suffered. The game against Portugal was also quite even. But we were quite sure of ourselves. Fernando Llorente coming on changed the game and the dynamic of the play a bit. They weren’t expecting it. We weren’t a team that used Fernando a lot, but that game showed the intelligence of the group a bit. We knew how to adapt. We liked having the ball a lot and from there, when we had the game under control, we started to attack. [Against] Portugal, we were a bit more direct and Fernando helped us a lot in that game.

Yeah. We had a very good game against Germany but, with it being against Germany, they had a few chances which could’ve sent us out. It was a very even game, but [Carles] Puyol’s header was unforgettable. I still remember it and we kept going with the confidence we’d been building.

It’s a move that defines what football is a bit and what we sometimes don’t see – the bench. We always talk about the starting XI, but sometimes those that come on can make so much difference and the coaches know that. I remember coming on with a lot of will, more will than normal. I don’t know if it was because I was excited about playing in a World Cup final or whatever, but I remember coming on very strong, building myself up a bit much. They had the ball on the left wing. We sandwiched them with Sergio Ramos, we won possession and that’s where Jesus [Navas] picks it up and starts to do his run.

How can I not be? [laughs] The team was a bit affected by the whole fatigue of the game. We were both as tired as each other, but I felt strong. I started to go up from full-back and Jesus was like a train. The ball comes to me, then to Andres and it arrives at Fernando [Torres]. I’m on one side of the area, doing the same run that Andres as doing [on the other side]. We did a run into space. I see that the Fernando’s pass isn’t getting to [Iniesta] and that’s where I drop in a bit expecting the ball to come loose on the edge of the area. I’m anticipating it. I sensed it a bit and there was the ball.

I like it because I control it at half height. It sets it up nicely for me to play a diagonal ball to Andres. I think the fact that the defender was [Raphael] van der Vaart favoured me as well [because], not being a natural defender, he tries to play offside and he makes it even easier for me. I see that Andres isn’t offside and he is able to control it in the right direction. Van der Vaart tries to get back but it’s too late. After that, an explosion of adrenaline, joy, happiness. At that moment, you’re not thinking that there’s still four minutes left.

I saw myself as a champion at that moment. We’d defended quite well and they were down to 10 men as well. We knew how to see it out.

It is, without doubt, the assist of my life. To be honest, I knew it was a goal when I saw the second bounce, when I saw that he’d controlled it and that the ball was already sat up for Andres to connect with it. I was already saying: ‘Don’t let me down Andres, put it in’. It was spectacular. Probably for all 23 of us, although I don’t want to talk for the others, but it was the best moment of our careers.

It was spectacular. We’d already experienced something incredible in 2008 with the Euros celebrations in Madrid. I’d never seen anything like it in other countries. I doubt there has been anything as incredible as what I experienced in March on that July 12. They told us that the bus journey would take two hours and it was four-and-a-half. People were blocking the streets. They were on all sides, right from the airport. I didn’t see a single car. There were just people walking, jumping and dancing in the Madrid streets. It was crazy. Incredible.

I don’t know. In the end, being part of it or not is just a statistic. They are moments that are engraved, that no one can change. They are things that are there forever. Another thing is whether you like more or less [than others] or whether people think you’ve done more or less [than others]. The images are there, they’re engraved for all of us, for millions of people. I can only speak for myself and say that I feel fortunate for having been part of that generation of such incredible players.

A complete gentleman, a great person, a brilliant coach, very humble and with a big heart. What’s always stood out for me about him is how well he knew how to read games once they’d just started. He had his team more or less set but he knew how to reach games when it came to making changes and seeing who to bring on. He was truly fascinating. From the outside, you follow a game and, well, there’s a substitution, there’s another, but on the pitch and I’ve experienced it in the day-to-day, he almost always nailed it for so many years. I’d never seen something like that, but that’s what stays with me a lot.