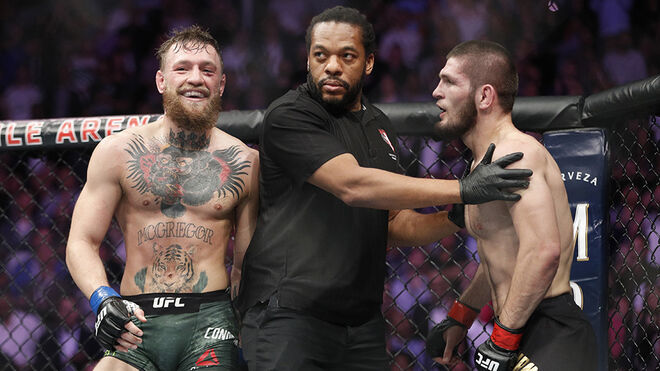 Conor McGregor is supposed to be preparing for his fight against Dustin Poirier in the most anticipated UFC trilogy, but that didn’t stop him from causing a social media storm with comments aimed at Khabib Nurmagomedov.

The Irish fighter sent out some controversial tweets about Khabib about the bout they had in 2018.

McGregor responded to a follower who claimed that he was a cheater and broke the rules in the fight between the pair, prompting the former champion to respond.

“Real dirty. I’ve felt the commentary wrath a few times. Imagine this was the round I had won too,” McGregor wrote.

“The guy was holding onto me crying to referee saying I was breaking the rules or some s***.

“And they try and say that I said this only business s***. Absolute horse plop.”

Then, in another tweet, McGregor responded to claims that he had illegally held Khabib‘s shorts.

“I wasn’t holding his shorts! I was ramming my fingers up his homophobic ass,” McGregor wrote.

McGregor then deleted the aforementioned tweets shortly after.

0 30
The Pichichi and Zamora prizes at Real Madrid: Tougher than the seventh European Cup

0 45
Zidane places his trust in Vinicius: I don’t have to tell him anything