Lionel Messi had a goal ruled out during Argentina’s 1-1 draw with Paraguay overnight – and you have to feel for the Barcelona superstar.

Messi has found open play goals hard to come by so far this campaign, with Argentina having similar struggles in finding the back of the net.

The 33-year-old actually did score in the early hours of the morning, but a poor VAR review led to it being chalked off.

Argentina took on Paraguay in their latest 2022 World Cup qualifier overnight, being held to a 1-1 draw, but it could have been a different story if the below Messi strike was allowed to stand. 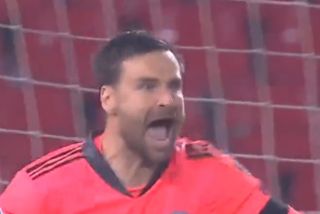 There’s not much arguing that can be done against the decision to adjudge that the be a foul, but the incident happened almost 30 seconds prior to the ball hitting the net.

With Argentina keeping the ball throughout, you could judge this to be just the one phase of play, but seriously, how far are we going to rewind to continue ruling goals out in this manner?

The real issue here is that both the referee and his assistant were well-positioned to see the foul in the first place. There should have been no need to hit the rewind button for 30 seconds.

Poor Leo. What a farce.