It was business as usual for the defending Bundesliga champions when the season in the German top flight resumed last week after a two-month break as they left the capital with the three points won against Union Berlin in their pocket. Now they welcome Eintracht Frankfurt to the Allianz Arena where the two teams will face each other in front of the empty stands on Saturday evening, in the 27th round of the campaign.

Looking at their last six matches, the Bavarians appear to be on terrific form, if you can call it form given the length of the forced break due to the Covid-19 pandemic. They won five of those and drew once, and it looks they’re getting a firmer grip on their champions crown which, for a large part of the season, looked like it could end up on the head of one of their fierce rivals. Now, however, they lead the pack by four points with Borussia Dortmund in second place. Borussia Monchengladbach have two less than Dortmund in third, RB Leipzig one less than Gladbach, and Bayer Leverkusen in fifth one less than Leipzig.

Of course, Bayern will be keeping an eye out for the way this season’s Champions League will be resolved, but with that competition on hold at least until early August, they’re likely to keep their minds fully on the Bundesliga until it’s over.

Midfielders Philippe Coutinho and Corentin Tolisso are both confirmed absentees for this match, and neither of them is expected back in action any time soon. The rest of the squad is at coach Hans-Dieter Flick’s disposal, and it will be interesting to see if he decides to shuffle his team at all after the Berlin trip. Wingers Kinglsey Coman and Ivan Perisic could be back in the line-up after starting that game on the bench.

Eintracht’s Bundesliga campaign can only be described as an underwhelming one. Having qualified for the Europa League after the 2018/19 season, they are now in 13th place with 28 points to their name. They aren’t likely to get relegated with five points more and a game in hand on Fortuna Dusseldorf in 16th, but it’s a significant step in the wrong direction anyway. It seems that the departures of forwards Luka Jovic, Sebastian Haller and Ante Rebic last summer left a big void in the squad, one that hasn’t been easy to fill.

Their last six league matches saw them draw once, win once and then lose four in a row. While defeats against the likes of Dortmund, Leverkusen and Gladbach could fall under the heading of understandable, a home loss to Union Berlin was a rather disappointing result among those.

The forced break in football caught the Europa League midway through the round of 16, but Eintracht weren’t likely to progress from there after they lost the first leg at home against Basel by 0-3. All in all, they will certainly look to do better in 2020/21.

Head coach Adi Hutter won’t be able to call upon midfielder Dominik Kohr who is suspended for the Munich trip, while forward Goncalo Paciencia is out with a thigh injury. The rest of the squad are all in contention.

Looking at it from any angle, things don’t look good for Eintracht. They rarely look good for any team in Europe facing Bayern in Munich, but the visitors will likely have a very hard 90 minutes indeed. Bayern are simply ruthless winners who won’t be making any compromises as they seek to lift the title again. The Eagles won by 5-1 in the reversed fixture which led to Niko Kovac’s sacking from the Bayern dugout in November, but that will only give the Bavarians extra motivation.

Coronavirus: Nurse reported for only wearing underwear beneath transparent gown

Fri May 22 , 2020
Coronavirus She has since been offered work as a model Instagram (@newstularu) A Russian nurse named Nadia has been reported and a disciplinary proceeding has been opened up after she wore nothing but underwear beneath a transparent protective gown while at work. She was working at Tula Regional Clinical Hospital and […] 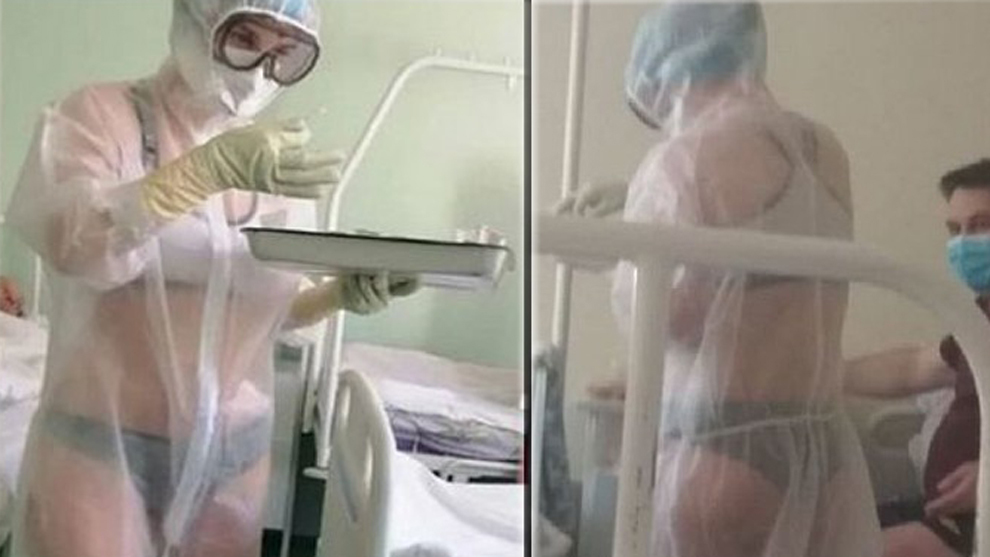