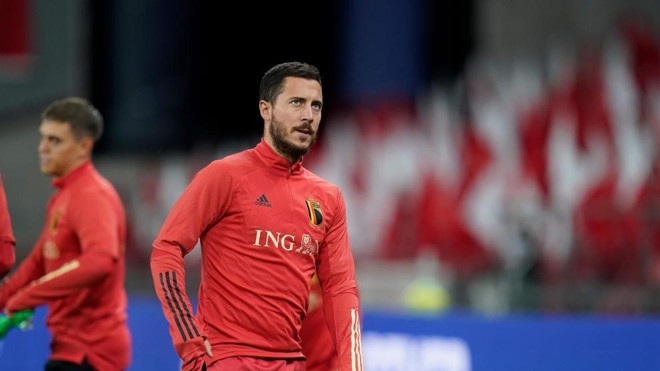 However, in his first year with Los Blancos, the Belgian has been far from the talisman and leader everyone was expecting.

A large part of this is due to his fitness issues, with his international boss raising further questions over his physical state going into the new season.

Hazard didn’t play in either of Belgium’s Nations League games this month, despite travelling with the squad.

Roberto Martinez believes the forward is 60 training sessions away from being fit enough to start, which begs the question as to why he was called up in the first place.

Heading back to Real Madrid for the start of the new season, Hazard has a reputation to rebuild, as well as his fitness.

The Real Madrid squad have no problems with Hazard or any aspects of his behaviour.

He might not have made a good first impression last summer, turning up for pre-season overweight, but he’s had bad luck with injuries since then.

The ankle problem he suffered in November 2019 and the following relapse in February were really bad news for everyone connected with Real Madrid.

When Hazard and Los Blancos returned after lockdown, the former Lille star showed glimpses of his best before picking up a knock against Espanyol.

Now, it’s about finding his feet as a player and regaining his confidence in his injured ankle.

Real Madrid still believe Hazard can become the player they thought he would be at the Bernabeu, but recent events on international duty have prompted some concerns about his fitness.

The club would’ve preferred him to stay at Valdebebas rather than go with Belgium, but they also understand what representing his country means to the 29-year-old.

Amongst the coaching staff, they’ve put a plan in place to allow Hazard to rediscover the form that saw him become one of the best players in the world at Chelsea.

The Belgian was named player of the year three times at Stamford Bridge, most recently in his last campaign there in 2018/19.

Looking forward, Hazard will be focused on reaching full fitness within the next two or three weeks, just in time for the start of the LaLiga Santander season.