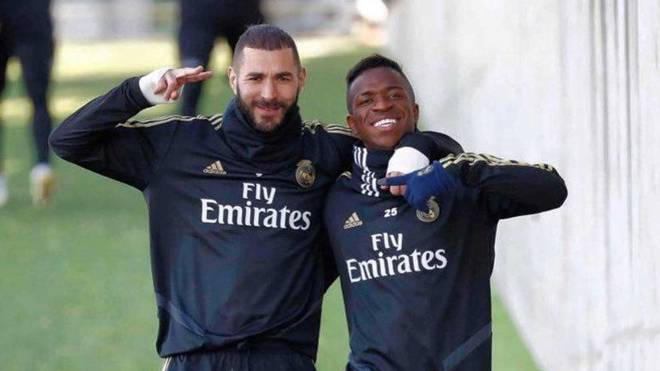 Real Madrid returned to full training on Thursday morning after being given a rest day on Wednesday and it provided a chance for Karim Benzema to talk with Vinicius and bury the hatchet after the commotion caused by his leaked conversation about the youngster.

At half time in Los Blancos’ 2-2 draw with Borussia Monchengladbach, Benzema was seen on camera saying some rather unedifying things about the Brazilian’s performance, but it now appears that he has explained himself to the former Flamengo prodigy.

As a result of the incident, shared by Telefoot, all eyes were on the pair during Thursday training, despite the fact Benzema hadn’t actually spoken Vinicius’ name during his outburst.

Benzema approached his teammate during the session, with the pair both taking part in the rondos session for international players, to talk through the matter. Neither wanted to give too much importance to it and the case is now closed.

Vinicius accepted the explanation from Benzema, who has never wanted to harm a teammate he appreciates. These two players in particular have always had a great relationship.

The club are happy for this case to be put in the past, as they want everyone to be united as Los Blancos look to get out of their Champions League group and as they prepare to face Huesca in LaLiga Santander on Saturday.

Two late goals in Germany rescued Real Madrid from their worst ever start to a Champions League campaign, yet they need to improve a lot in order to get back into a strong position to progress into the knockout phase.

They have back-to-back matches against Antonio Conte’s Inter side and these will be vital, although the Huesca fixture is the immediate priority.

A Clasico victory over Barcelona saw the Real Madrid club return to winning ways domestically, but they now need to find a way to bring consistency to both their domestic and continental performances. For that, the return of Eden Hazard couldn’t possibly have arrived at a more welcome moment.