Real Madrid – La Liga The next generation of midfielders 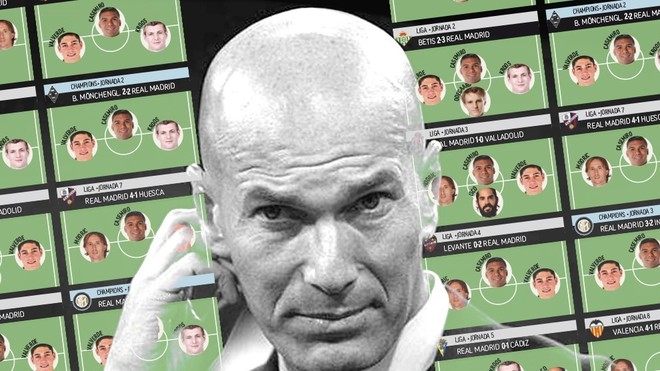 While the BBC attack of Karim Benzema, Gareth Bale and Cristiano Ronaldo scored the majority of the goals as Real Madrid won three Champions Leagues in a row, the midfield trio of Casemiro, Toni Kroos and Luka Modric was just as key for Zinedine Zidane.

Since the 2018 Champions League final in Kiev, it hasn’t quite been the same for those three in particular. They’re still regulars for Los Blancos, but their dominance in midfield has been broken up by a couple of newcomers.

Fede Valverde has emerged on the scene in the last couple of seasons and had been Zidane’s most used midfielder up until his injury against Valencia. The Uruguayan’s absence for the next month or so opens the door for other candidates in the middle of the park.

No midfielder has played more than Valverde’s 810 minutes for Real Madrid in all competitions this season and none have scored more than his three goals. He’s started nine out of his 11 appearances, also standing out in recoveries (46) and dribbles (15).

The Croatian international has also featured in each of Real Madrid’s 11 games this campaign, starting seven times – not included crunch matches against Barcelona and Inter. The veteran has scored two goals, made more passes than any of his fellow midfielders (510), created 20 goalscoring chances and completed more dribbles (17) than any other midfielder.

While Zidane continues with his 4-3-3 formation, Casemiro is virtually guaranteed a starting place. The Brazilian is essential in the holding role, playing every game for Los Blancos this term before missing the trip to Mestalla after testing positive for coronavirus. As well as one goal and one assist, the 28-year-old has made more recoveries (67) than any other midfielder at the club.

At the age of 30, Kroos is finding himself in and out of the team under Zidane. He’s played nine games this season, starting only six of them and being substituted in four of those. The German has created more goalscoring chances (21) than any of his midfield teammates.

He’s had his chances but Isco can’t seem to find any sort of form in a Real Madrid shirt these days. The Spaniard started both the 2017 and 2018 Champions League finals, but only three of his six appearances for Los Blancos this campaign have come from the start.

Martin Odegaard started both of Real Madrid’s opening two LaLiga Santander games this season after returning from Real Sociedad but has seen his campaign stagnated by injuries. Now back to full fitness, the Norwegian could seize his opportunity in Valverde’s absence.