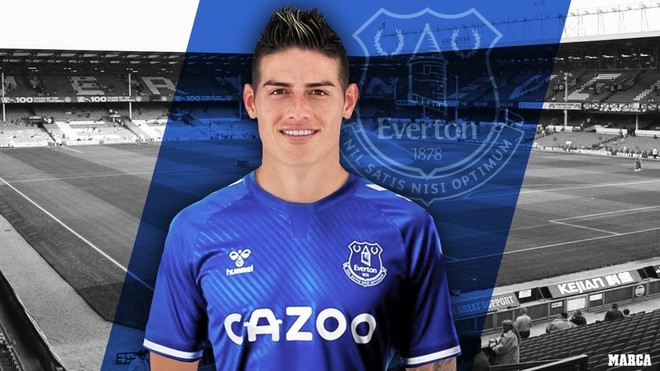 Everton have announced the signing of James Rodriguez from Real Madrid.

Carlo Ancelotti has been the key figure in this deal, persuading the Colombian to swap the Estadio Santiago Bernabeu for Goodison Park.

“I am really, really happy to be at this great club, a club with so much history, and here with a manager who knows me really well,” James told Everton’s official website.

“I’m looking forward to achieving great things here – and winning things, which is what everyone’s aim is.

“I’ve come here to try to improve, to get better. I’ve also come here to help the team to win, to play good football – entertaining football.

“I’m convinced, with Carlo and his technical staff, we can achieve big things and one of the big reasons [I signed] was the presence of Carlo Ancelotti.

“I have enjoyed some great times with him previously at two different clubs. That was a massive reason to come here.”

The Everton boss also praised his new signing, and admitted his excitement at bringing James to the club.

“James, as everyone knows, is a fantastic player with a lot of quality and a lot of ability to make assists for the strikers,” Ancelotti added.

“He’s really excited about the project of the club and the fact we want to improve. He was really excited to sign and I didn’t spend time to convince him – he was already convinced.

“Players like James and Allan can help us to be better and we can help them to be better. This kind of connection can be helpful to improve the results, the team and results of this Club.”

It was Ancelotti who got the best out of James during the player’s six years on the books at Real Madrid.

Once the Italian coach had left, James was unable to break into the first team at the Bernabeu, with Casemiro, Toni Kroos and Luka Modric often occupying the midfield places.

As a result, Ancelotti took James to Bayern Munich on a two-year loan deal, where he scored eight goals and made nine assists in his first season.

After a disappointing second spell under Niko Kovac in Germany, James returned to Real Madrid but found himself in a similar situation as before.

With Zinedine Zidane at the helm, the Colombian international featured rarely during the 2019/20 campaign and has now been forced to leave the club.