Real Madrid Benzema and Vinicius situation is a problem 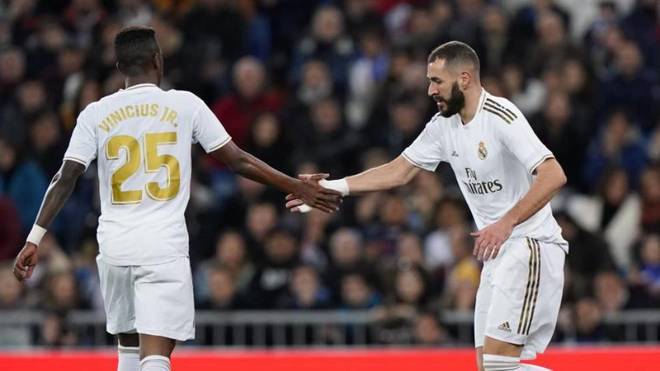 Irrespective of the content of Karim Benzema’s conversation with Ferland Mendy about Vinicius Junior, in which he was letting off steam, this isn’t the first instance of a disagreement between a veteran presence in a dressing room and a promising novice.

At Real Madrid there have been several high-profile cases, where tension has threatened to boil over either in the middle of a training session or a match itself.

The former captain was demanding by his very nature and whilst on a pre-season trip to Irdning, the leader of the dressing room at that time overtook a number of younger players in what was a continuous running exercise. “If it were up to me, I would send you all back to Madrid today,” Raul declared. The truth is that Raul wasn’t easy to make friends with whilst wearing the famous shirt. He was demanding with players who came from abroad too, as Cicinho and Robinho will attest to.

Cristiano is in training and anticipates a move, yet instead of making contact with the ball, a youth defender clatters into the Portuguese forward’s foot, leaving him in a lot of pain. Cristiano makes no effort to hide his anger, despite the immediate apology from the Castilla defender.

The session continues without any major consequences for Los Blancos’ star player, but it was an incident which cost Manu Hernando a further chance to train with the senior team that season. It’s unknown if this was directly related to the challenge on Cristiano, but the fact remains that Manu went from being a regular at senior training to disappearing from Zinedine Zidane’s thinking.

“Although it might not look it, these are quite common situations, but that’s no excuse; my reaction should not be that we always go to a confrontation, right, Regui?”

These were the words of Real Madrid captain Sergio Ramos to Sergio Reguilon after a collision in training saw the left-back involuntarily hit the veteran in the face during a small handball-type drill.

Ramos made an angry gesture towards the young defender and actually kicked the ball at him twice.

It can also happen the other way around with a young player standing up to veteran leaders in a dressing room, and this was

exactly the case with Benzema himself during his time at Lyon.

In his first senior call-up, the forward had to say a few words to his team-mates who were laughing along.

“I don’t know what you all find so funny, because I’ve come here to take your job,” Benzema declared, leaving the room stunned.

This was another training session incident, where the academy prospect dared to nutmeg the great Lionel Messi, and he didn’t take it very well, to the point that the veteran actually left the training session. It occurred during a Rondo drill and Gerard Pique had to mediate the issue in the end. Furthermore, the gesture given by Benzema towards Vinicius was also done by Messi towards Isaac Cuenca.

In an interview with MARCA, Ferran Torres did little to endear himself to Valencia supporters after he left the club to join Manchester City.

When asked about the then-club captain Dani Parejo, the young winger didn’t have any real positives to say about their relationship.

“I have to say that after three years’ experience in the first team, I have grown mature and mentally strong, but I didn’t have that at 17 years old,” Ferran said.

“Parejo is a great player, but personally I’ve never had a relationship with him. When I got into the team at 17 many weeks passed before he said a simple ‘Good morning’ to me. I don’t think he was a good captain with me.”