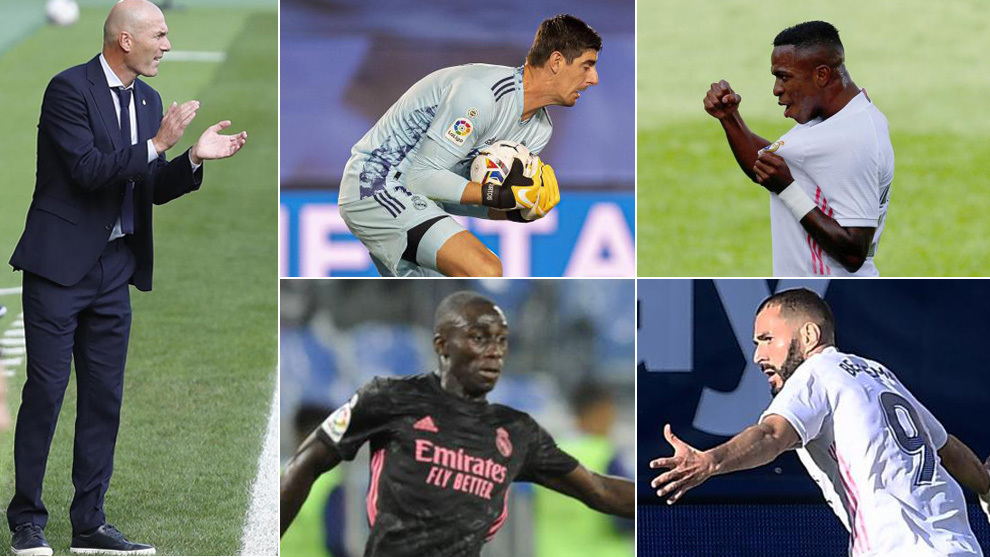 Real Madrid have entered the second international break of the 2020/21 season as league leaders in LaLiga Santander. Three wins and a draw from their opening four games mean Zinedine Zidane’s side are on the right track to defend their title. Granted, they have played one more game than challengers Barcelona, Sevilla and Atletico Madrid, but the signs are promising for Los Blancos.

Thibaut Courtois, who is on fine form between the sticks, has kept clean sheets in three of his first four games – against Real Sociedad, Real Valladolid and Levante. In Real Madrid’s opening fixture against La Real, doubts arose again over the team’s ability to score goals freely.

Debutants Marvin Park and Sergio Arribas were brought off the bench ahead of the likes of Luka Jovic and Borja Mayoral at the Reale Arena. However, three goals against Real Betis (Fede Valverde, an own goal and Sergio Ramos), one against Valladolid (Vinicius Junior) and two against Levante (Vinicius and Karim Benzema) have answered a few of those questions. Benzema’s late second against Levante at the Estadio de la Ceramica means he’s off the mark for the campaign.

Real Madrid have picked up 10 points from their first 12 games, all while having to heavily rotate their squad. Zidane has used a total of 23 players – 21 from the first team – in those first four league matches, with Nacho Fernandez and Lucas Vazquez the latest to earn minutes against Levante. Only the injured trio of Eden Hazard, Eder Militao and Mariano Diaz – plus Andriy Lunin – are yet to feature this season.

Zidane’s rotation policy has seen just four players start all four games – Courtois, Ramos, Benzema and Raphael Varane. Injuries to key players have played a key role in all this chopping and changing, with up to 11 players suffering an injury so far this term.

Those currently on the treatment table are Dani Carvajal, Alvaro Odriozola, Toni Kroos, Militao, Hazard and Mariano, while Marco Asensio, Isco, Jovic, Lucas and Marcelo have all been out of action at some point. Now, Courtois has suffered a small problem while on international duty with Belgium and Lunin is waiting on a second negative coronavirus test.