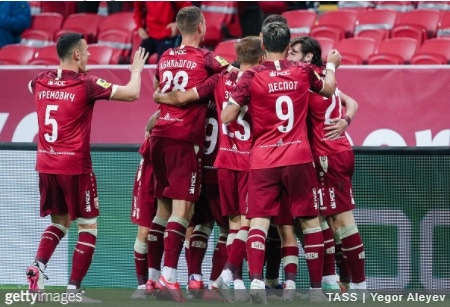 In the opening round of the Russian Premier League, Rubin Kazan booked the first three points for the 2021-22 season with a huge win over Spartak Moscow at the Kazan Arena on Saturday.

Sticking to the task

The best way to explain how Rubin achieved their victory in this match is probably to say they stuck to the task at hand from the first to the final whistle.

Having finished second last term and shown a high level of desire and quality through pre-season, it only stood to reason to expect Spartak to walk away from Kazan with a collective smile on their faces. Indeed, the visitors pushed forward hard from the start, completely dominating possession and keeping the ball in the opposition half practically all the time during the opening 15 minutes.

Rubin defended for their lives at first, but at that moment they started breaking up play with a strong physical approach, taking full advantage of referee Vladislav Bezborodov allowing plenty of contact. They gradually pushed the opponents back, winning the ball higher up the pitch every time and eventually established a nice level of balance. They looked to hit back through quick counterattacks, but they also caused Spartak problems with a few longer, positional attacks.

In short, they defended as hard as they could, they hit back whenever and wherever possible, got the goal, and protected their lead successfully to the very end. The three points they booked are fully deserved, despite Spartak dominating the statistical side of the contest.

It would be far too easy to name Rubin left-back Ilya Samoshnikov as the Man of the Match for the fact that it was him who scored the all-important goal, but there’s a lot more to it than that.

It was a top-level all-round performance from the 23-year-old. He was everywhere on the pitch.

Quite apart from the fantastically taken goal in the 49th minute, the prettiest moment of the match also came from him, enhanced though it was by Spartak goalkeeper Aleksandar Maksimenko. Minute 62 was running when Samoshnikov whacked a volley from range, sending the ball in a trajectory slightly curving away from the goalkeeper and travelling at great speed straight into the top corner. However, Maksimenko proved equal to it by flying through the air and diverting it around the post with the tips of his right-hand fingers.

With four successful tackles, six clearances and two interceptions, with just one foul committed over the entire match, Samoshnikov pretty much stood out from the rest of the players in defending as well.

There are a number of top clubs looking for a left-back to provide performances like this, and if Samoshnikov keeps them going through the season, he will undoubtedly be among the more sought-after players in the market come next summer.

Apart from Samoshnikov, winger Khvicha Kvaratskhelia also looked very lively and caused the visitors plenty of problems, and the performance of goalkeeper Yuri Dyupin should also be praised.

As has been said, Spartak were widely regarded as the favourites ahead of this match. So what happened?

One of the most difficult tasks a football manager faces is pin-pointing exactly what went wrong when the team suffered an unexpected defeat. Spartak have some notable names in their ranks, not least Dutch international Quincy Promes and former Chelsea, Liverpool and Inter Milan winger Victor Moses. However, apart from a few danger-hinting moments from Promes, the pair failed to inspire their team to earn anything from the match and both were taken off in the second half. To his defence, it should be said that Moses had Samoshnikov to compete against on his side of the pitch, which proved mission impossible on this occasion.

In all fairness, Spartak did manage to create a couple of great chances despite the resolute defending by the hosts, but luck and Dyupin’s performance in the Rubin goal prevented them from taking any.

But most of all, an apparent inability to cope with Rubin’s sudden changes of pace and quick transition seem the biggest reason for this underwhelming result from Rui Vitoria’s side.

Be that as it may, Rubin got the start of the season they were hoping for and they will end the opening round in the top half of the table, which is obviously a lot more than can be said of Spartak.

0 18
Edinson Cavani was offered to Barcelona and Juventus?