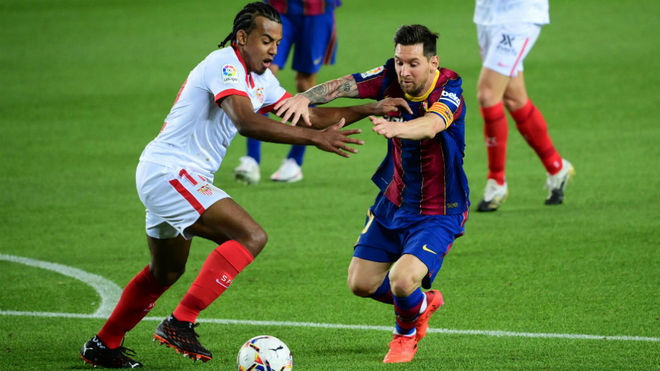 Only Bayern, in extra time, got the better of them and, from this group of players who continue to attract the attention of European football, Kounde again proved his emergence as a centre-back to watch this season.

The young French player didn’t feature last season in Barcelona and he was keen to show what he can do against one of the teams that have enquired about his situation.

Barcelona have never seriously considered making a move for the Sevillista, but they did try to insert a first-option clause as part of the Ivan Rakitic deal, which Sevilla rejected.

The team who were actually close to landing Kounde were Manchester City, who made a first offer of 55 million euros, which was rejected.

Furthermore, Pep Guardiola’s team wanted to include Nicolas Otamendi in the deal, something Monchi wouldn’t consider.

After the UEFA Super Cup against Bayern and another great performance by the defender, Monchi feared that City might make a real move for his most promising player.

The English team eventually turned their gaze to Ruben Dias and Sevilla could breathe easy.

As they know the level of player Kounde is and there’s still no telling what his ceiling might be, his value in non-pandemic times would be even higher.

Kounde’s buyout clause is 80m euros and the Andalusian club are hoping for no last-minute scares on Monday when the transfer window closes.

The player is focussed, though.

“At Sevilla I have everything I need,” he said after Sunday’s match.

If there’s no movement, Sevilla will enjoy another year of the ease with which Kounde makes the hard things look simple.

He kept the reins on Ansu Fati and even Lionel Messi when he came into his area.

He’s quick, has good positioning and a map of the pitch inside his head.