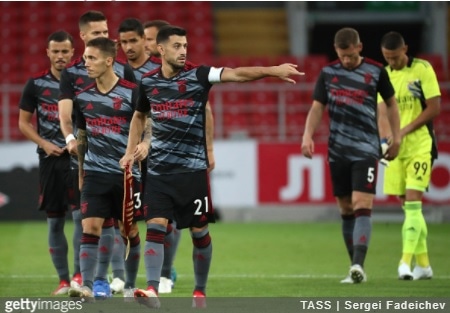 Benfica justified their status as the favourites in the first leg of their clash with Spartak Moscow in the third round of the Champions League qualifications on Wednesday evening at the Otkritie Arena in Moscow. Goals from Rafa Silva and Gilberto have given the Portuguese side a considerable advantage ahead of the rematch in Lisbon.

The first legs in any kind of knockout competitions are usually slow affairs, especially in the beginning. Both teams will often take a most cautious approach, rarely taking risk by sending too many players far upfield.

However, it was rather different on this occasion. Both sides sought to take control of the ball and play closer to the opposition goal than their own, and with just five minutes gone, chances started coming on a regular basis. Benfica threatened first with Silva having a potentially dangerous shot blocked; then Spartak hit back as Zelimkhan Bakaev broke through the middle and engaged Jordan Larsson on the left, but Larson’s cross failed to find Aleksandr Sobolev who was waiting in a good position in the box. Then it was Benfica’s turn again as Silva on the left found Diogo Conclaves on the far post, but the right-back’s header was well saved by Aleksandr Maksimenko in the Spartak goal. All this happened between minutes five and 10, which goes to show that both teams threw caution into the wind much earlier than was expected.

The match continued much in the same manner for the rest of the half. Pizzi squandered a fantastic opportunity for Benfica created by Haris Seferovic, and at the other end, goalkeeper Odysseas Vlachodimos was forced into an extremely difficult save by a 30-yard rocket from Nail Umyarov. Silva was again very dangerous for the visitors in the 27th minute when his fine dribbling skill got him in a position to shoot unobstructed from 10 yards, but his curled effort with the outside of the right foot went just around the far post.

Spartak raised their game significantly in the final minutes of the half, pressing high and getting into promising positions more frequently than before, but the score remained unchanged.

Nonetheless, Benfica’s chances in general looked far more dangerous, and perhaps it was a sign of things to come after the break. They finally took one in the 50th minute through Silva, who played a nice one-two with Joao Mario before firing past Maksimenko from close range. Spartak players seemed to have run out of ideas at that point, while Benfica now took a more patient approach, and in the 73rd minute, Gilberto, who had come off the bench in the place of Gonclaves on the right defensive flank, made an unexpected run into the box to get on the end of a lovely through ball from Lucas Verissimo and finish in a manner similar to Silva earlier.

It was indeed a superb performance from the Portugal international. He was energetic, creative, worked very hard, arguably the best player on the pitch, involved in practically everything good Benfica did right until the 83rd minute when he was given a deserved rest and replaced by Adel Taarabt.

Silva seems an excellent combination with a player like Seferovic, who is also hard-working, particularly difficult to mark due to constantly moving around in the attacking line, but most importantly of all, unselfish and very capable of creating space for teammates to exploit. Silva certainly did that in this match, which is why he was able to influence the match so much. He fully deserved to be the one who scored the opening goal.

Silva has spent his entire career so far in Portugal, having played for Feirense and Braga before joining Benfica in 2016. He also has 23 caps as a Portugal international to his name, even though he rarely starts there. A player of his quality could have, perhaps, tested himself in a stronger league, with all due respect to the Primeira, but at the age of 28 and with three years remaining on his deal, it seems a bit late for that.

Benfica now have a healthy lead going into the second leg, and though many still perceive a two-goal lead as tricky, they’ve shown that they have slightly more in their locker than Spartak. It’s therefore quite reasonable to expect the Portuguese side to see the tie out with a favourable result in Lisbon and move into the final round without too much difficulty.

An early Spartak goal in the rematch could still cause uncertainty, however, and that is what Rui Vitoria’s team now must strive for with all their might, even though his record against Benfica boss Jorge Jesus doesn’t look promising in that aspect.

If they go through, Benfica will most probably face PSV Eindhoven in the last battle for a place in the group stage of the Champions League. The Dutch side have beaten Norwegian Midtyilland by 3-0 in the first leg, courtesy of Noni Madueke, Mario Gotze and Cody Gakpo, and it’s hard to imagine the Norwegian team bouncing back from that.

The prospect of Benfica playing against PSV is certainly an interesting one, though Spartak will feel they still have something to say about it.

0 28
Pochettino on Madrid-linked Mbappe: It´s a gift to have him at PSG