Reddit user u/OllieSW33 has shared some figures on the Chelsea subreddit which suggest striker Tammy Abraham could be criminally underrated.

Abraham enjoyed success out on-loan in the Championship with both Bristol City and Aston Villa, but looked ever so slightly out of his depth while at then Premier League outfit Swansea City.

It raised question marks as to whether he would ever be the required standard to play for Chelsea, though, he proved all of his doubters wrong during his debut season as a senior Blue.

Though Abraham has often played second-fiddle to either Olivier Giroud or Timo Werner, his stat-sheet under Frank Lampard, as posted by u/OllieSW33 on Twitter, is mightily impressive. 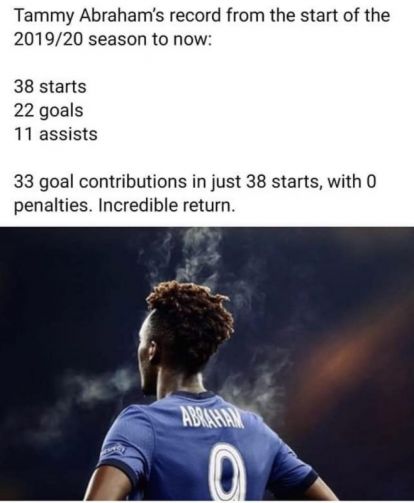 Abraham does not get anything near the credit that he deserves for what he has achieved at Chelsea at such a young age. He looks certain to be a key figure for both them and England for years to come.