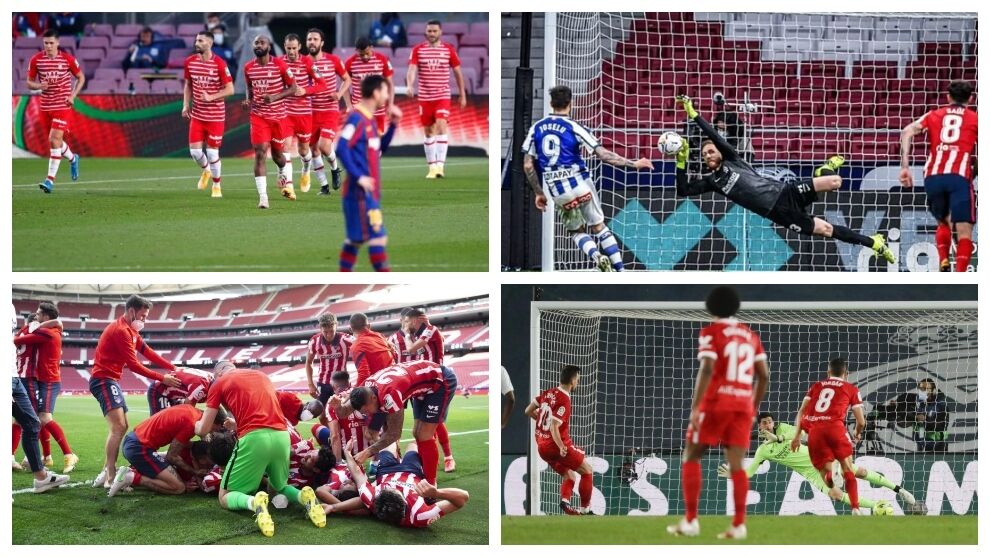 Atletico Madrid have fought back time and time again in this campaign for the LaLiga Santander title, especially when it looked more difficult than ever.

On a number of occasions they’ve been about to lose their lead in LaLiga Santander, but then others have given them a hand to help them retain top spot.

From the moments of tension early on in games, to last-gasp winners and penalty misses, Atletico have had seven lives this season.

When Joselu stepped up to take a penalty for Alaves after 87 minutes, he had the chance to make it 1-1 but Jan Oblak was having none of it and saved the effort and three points.

Barcelona could have taken control thanks to their magnificent 2021 form but Granada sprung a surprise at Camp Nou, even after Lionel Messi gave Barcelona the lead.

Darwin Machis and Jorge Molina gave another life to Atletico to continue to fight.

The woodwork as a friend

With Real Madrid and Barcelona on their tails, Atletico had to beat Elche and were on course to do so until an injury-time handball by Marcos Llorente.

Fidel Chaves stepped up and hit the post, saving Atletico yet again.

Sevilla go from rivals to friends

Julen Lopetegui‘s side were vying for the title right to the very end of the season, but their draw at the Estadio Alfredo Di Stefano was a pivotal moment in the title race.

Had Real Madrid won that tie, they would have gone top after Atleti drew 0-0 with Barcelona at Camp Nou.

Knowing how to suffer

As the title came closer, Atletico had a tense final few minutes against the ropes as their 2-0 lead against Real Sociedad was cut to just one goal difference when Igor Zubeldia scored in the 83rd minute.

Renan Lodi and then Luis Suarez fought back with strikes to keep Atleti in the driving seat heading into the final game of the season.

Of the club’s 10 league titles before this season, nine were decided on the final day, and few have been as stressful as this one after Oscar Plano gave Valladolid the lead.

Angel Correa and then Suarez again produced crucial goals as Atletico came back to life in the second half.

It is only with this courage and heart that this Atletico team could write their names into history with their seven lives.

0 32
Can Turkey end their 20-year wait for a World Cup appearance?