Coronavirus Lots of criticism for the president 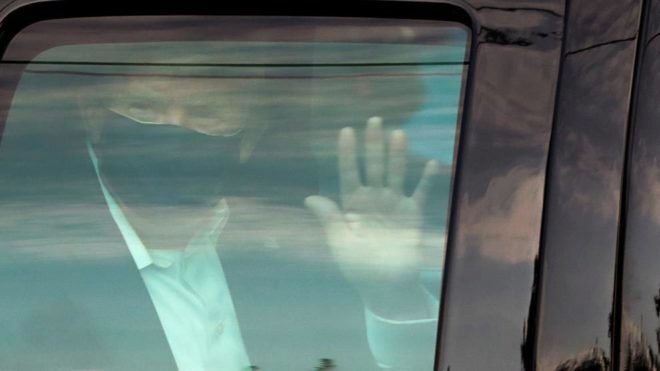 Just days after it was announced that US president Donald Trump tested positive for COVID-19, the president decided to greet supporters in a motorcade.

The 74-year-old had been admitted to the Walter Reed National Medical Center, but briefly ventured out on Sunday.

The presidential motorcade drove by the perimeter of the hospital and Trump could be seen waving to his fans through a window.

According to the White House, Trump returned to the hospital afterwards.

Yet he still received a lot of criticism for the drive, accused of breaking protocols by some and of simply being irresponsible by others.

“That Presidential SUV is not only bulletproof, but hermetically sealed against chemical attack,” tweeted James Phillips, an attending physician at the Walter Reed National Medical Center.

“The risk of COVID-19 transmission inside is as high as it gets outside of medical procedures.

“The irresponsibility is astounding.

“My thoughts are with the Secret Service forced to play.

“Every single person in the vehicle during that completely unnecessary presidential ‘drive-by’ just now has to be quarantined for 14 days.

“They might get sick, they may die, for political theatre.

“Commanded by Trump to put their lives at risk for theatre.

Over the weekend, Trump and his team insisted that the president’s condition was improving.

“I came here, wasn’t feeling so well, I’m much better now,” Trump said in a video message on social media.

“Over the next period of a few days I guess that’s the real test.

“We’ll be seeing what happens over those next couple of days.

“This morning the president is doing very well,” he said.

“The president is fever-free for over 24 hours.

“While not yet out of the woods, the team remains cautiously optimistic.”